Floodings at the Shelter Aiutiamoli

The shelter of the association "Aiutiamoli Dogsangel" is located in Sicily and home to stray dogs, a few cats and also poultry. Monika and Daniel, a young couple who moved to Sicily from the Czeck Republic a few years ago to live a quiet life, run the shelter. However, due to the immense suffering of the islands stray dogs, there was no way to relax, And so their new life became a mission to help the strays as much as possible.  Monica and Daniel eventually opened the shelter which is approved by the community but not supported. But the strays of sicily experience so much suffering, that the shelter continues to take in helpless or injured animals, castrate dogs and cats and pass them on - again and again an again. It's only possible due to donations and the own income of Monica and Daniel, but their reserves aren't enough for bigger conctruction work. 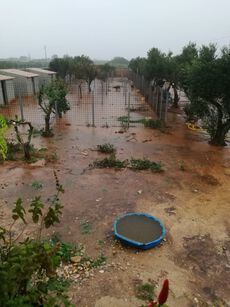 Autumn 2019: pelting rain for days led to huge flooding - a catastrophe for the little shelter. All the cages were flooded ankle-deep and once the water drained off enormous amounts of dirt and mud were left behind. Obviously, the shelter needed a drainage system urgently. But how could it be financed?

Thanks to our disaster fund they were saved - we financed the entire construction work, so that they're now prepared for future storms. The video below shows a part of new drainage system. All pipelines have already been laid, only the construction of the new cages remains to be completed.

We'd be happy about donations to our disaster fund, so that we can continue to provide help to animal shelters in the future!

Please donate for our causes to :